We had the good fortune this summer to work remotely with the TRAYLS group out of Hoonah, Alaska. 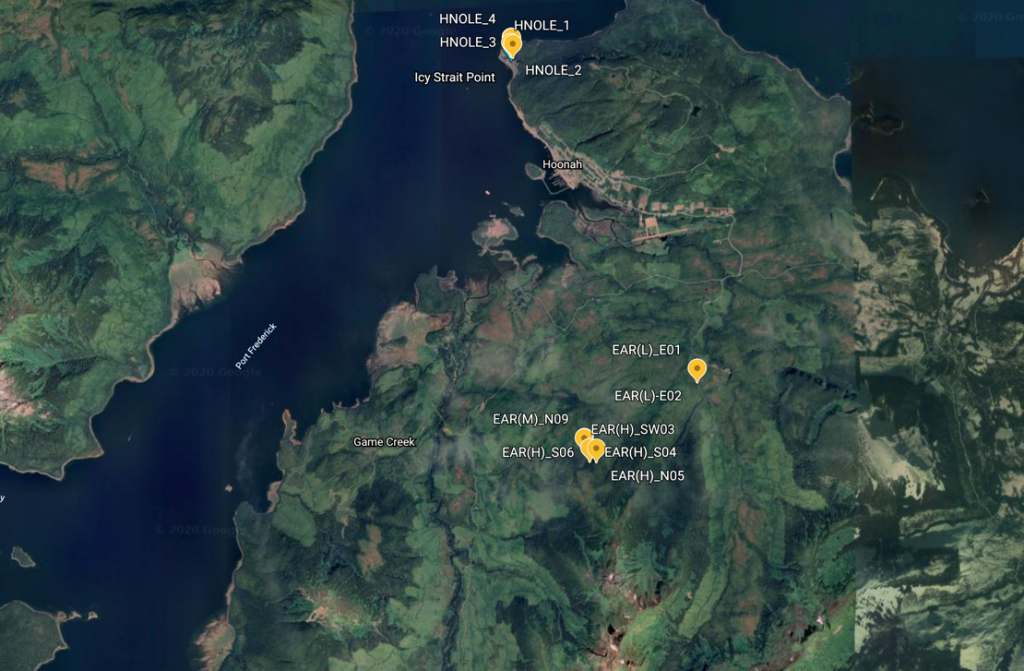 Figure 1. Google Earth map showing the location of the town of Hoonah and the coring sites. Two tree ring sites were sampled by the group the HN site in the town and the EAR site on Ear Mountain.

Arianna Lapke lead a group of four participants through an ambitious set of projects over much of the summer. Our collaboration with the group centered on meeting virtually with the group to describe the utility and sampling of trees for dendroclimate information. Below are the results of their sampling on EAR Mountain, Chicagof Island and our lab  work at the Wooster Tree Ring Lab. 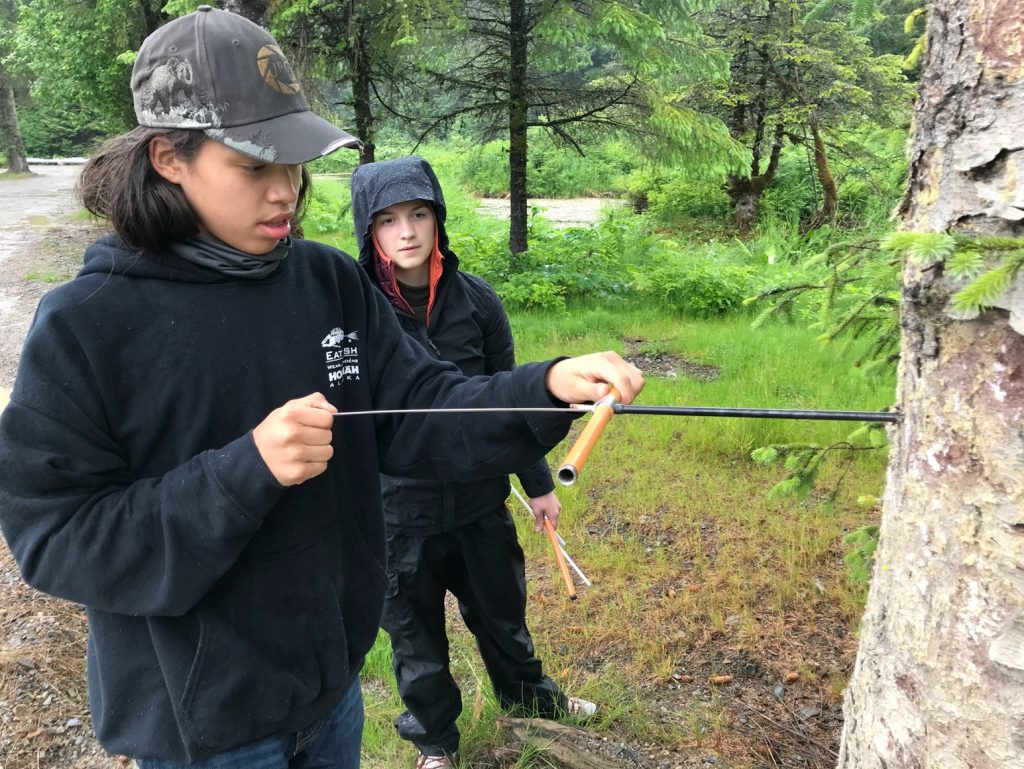 The group shown coring a Sika spruce just outside of town. 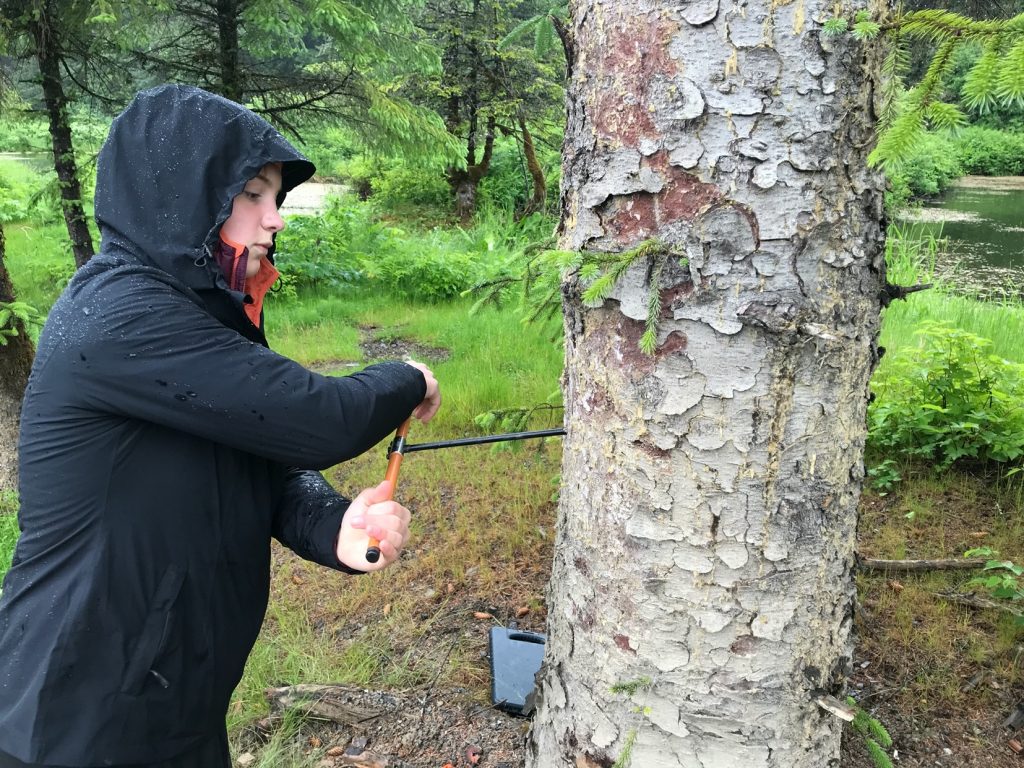 More coring – this time in the rain. 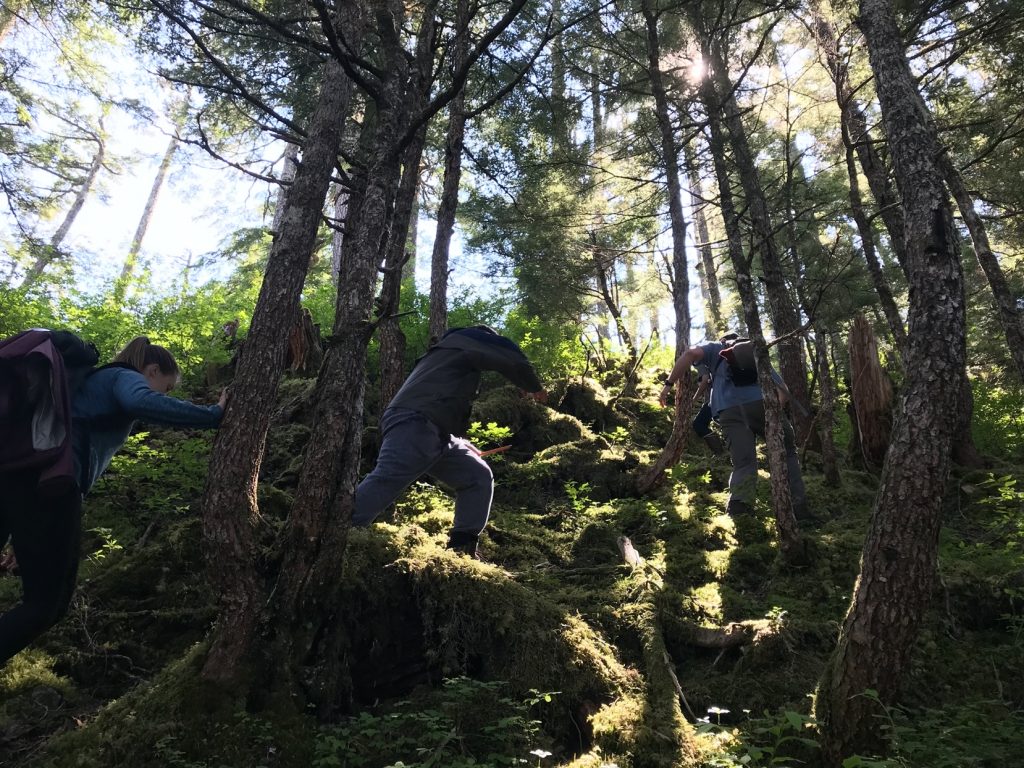 The steep climb up the flank of Ear Mountain to find the old Mountain Hemlocks. 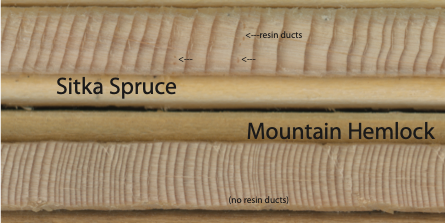 Comparisons of the fast growing Sitka Spruce and the slow growth of the higher elevation Mountain Hemlock.

The cores from the hemlock some over 400 years old show lots of stress , clinging to the mountain side and battered by storms. They are also showing a possible drop in ring-width over time

This chronology is truncated at 1720 or so when we had at least 4 samples. The most narrow rings follow the 1808 unknown eruption that cooled much of the region – it is unknown as no one knows where the volcano that erupted is located – it is recognized in ice cores.  The other intriguing feature is the relatively recent (last 50 year) drop in ring widths.  It may be due to increased evapotranspiration demands with increasing summer minimum temperatures.  There is a correlation of -0.39 (p<0.04) between tree growth and average April-August minimum temperatures. Other studies have shown that warming night time temperatures lead to increased respiration at night and along with possible greater ET demand or increased cloudiness during the day there may be a decrease in photosynthesis leading to  decreased carbon uptake (Sullivan et al., 2015). This is a promising line of research to further investigate the health of Mt. Hemlock in the region and it is something we plan to pursue with more samples in the future. 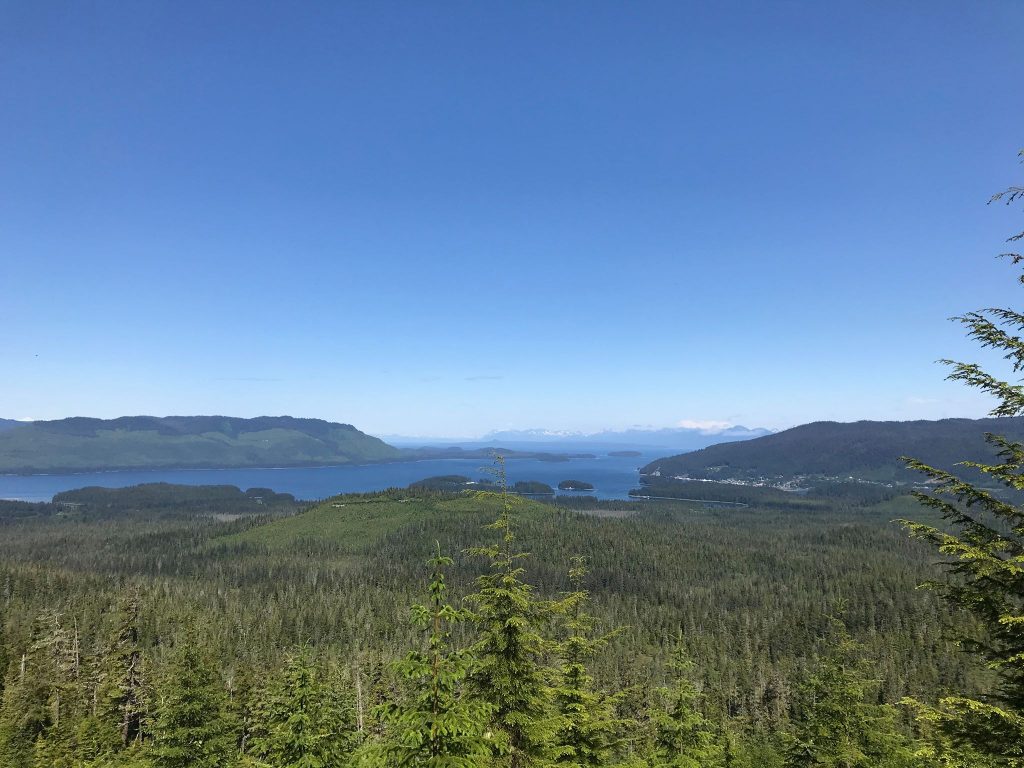 Acknowledgements: We thank Arianna Lapke and the TRAYLS group and look forward to future work with them. This work was supported by the Sherman-Fairchild Foundation, The Luce Funds and the National Science Foundation. NSF Grant AGS 8001184 supported Julia Pearson, Claire Cerne, Ben Gaglioti and Greg Wiles. We also acknowledge the contributions of AMRE participants – Mazvita Chikomo, Srushti Chaudhari and Fred Whenshuo.

By: Mazvita Chikomo, Srushti Chaudhari, Fred Zhao (as part of the AMRE 2020; The College of Wooster, Tree Ring Lab)

The aim of this study was to analyze White oak trees, to see how old they are and, how they are responding to the wetter and warming climate in Wooster, OH. 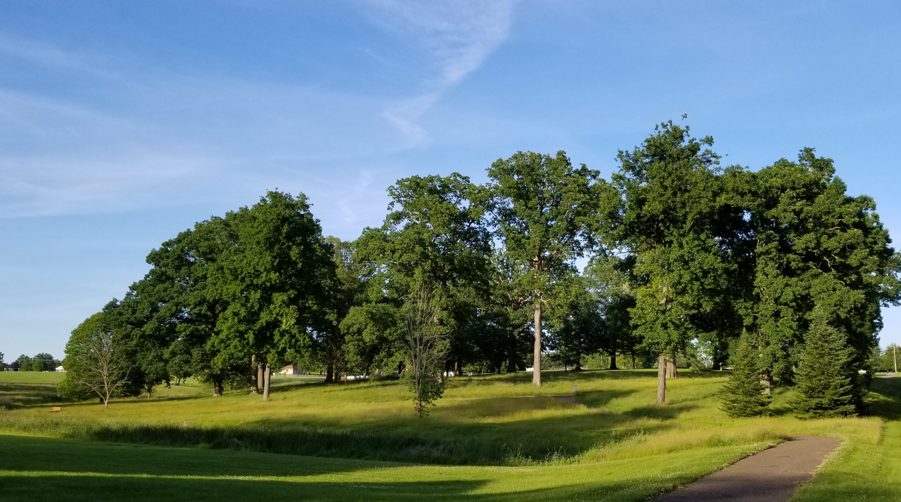 Kinney Field, located in Wooster, OH has long served as a recreational location for various sports and a nice place for public entertainment. On its southwest corner are several old white oaks making it an ideal destination for tree-ring research. The geological setting is an Ice Age kame (hill) left by the retreating Laurentide Ice Sheet approximately 15,000 years ago.  The hill on which the trees grow is thus a well-drained feature built of permeable sediments, likely sand and gravel. We set out to determine the age of the trees, build a tree-ring chronology from the ring-widths, and compare the ring-width series with the monthly meteorological observations recorded at Wooster’s OARDC since C.E. 1888. This helps us better understand how this important tree species is reacting to a changing climate.

Bottom line: Nineteen cores were taken from 11 trees and processed at The College of Wooster Tree Ring Lab. We found that the White Oaks (Quercus alba) growing in the Kinney Field are positively correlated with precipitation in the April, May, June, and July months and have a strong negative correlation with June temperature.

Methods: Nineteen 5-mm diameter tree cores from were collected from 11 trees (Table 1) and, combined to produce a ring-width tree-ring chronology (Figure 2) at the Kinney Fields site, in Wooster, OH (Figure 1). The samples were cross dated in The College of Wooster Tree Ring Laboratory (WTRL) and were measured to the nearest 0.001 mm. This was then statistically cross-dated using the COFECHA (Holmes, 1983) software, and the chronology was then standardized using the ARSTAN software (Cook et al. 1985). The final chronology is made up of 19 cores from 11 trees with a mean series intercorrelation of 0.66 and an average mean sensitivity of 0.24 (Table 2). We used the raw data for the final chronology and point out the upward increasing trend in the series (Figure 2). 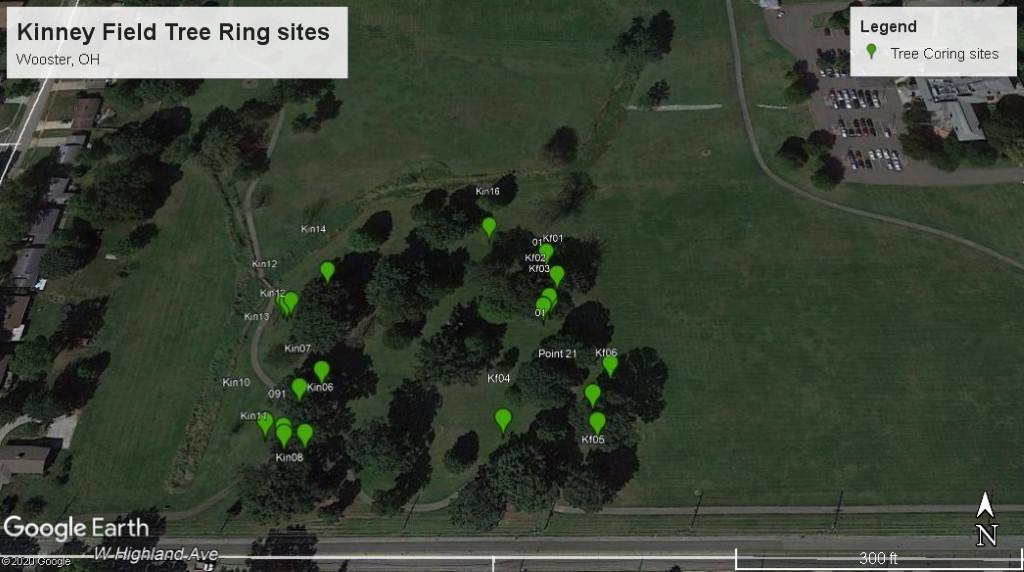 The team coring a White Oak.

Measuring tree cores from Kinney Field in the Lab. 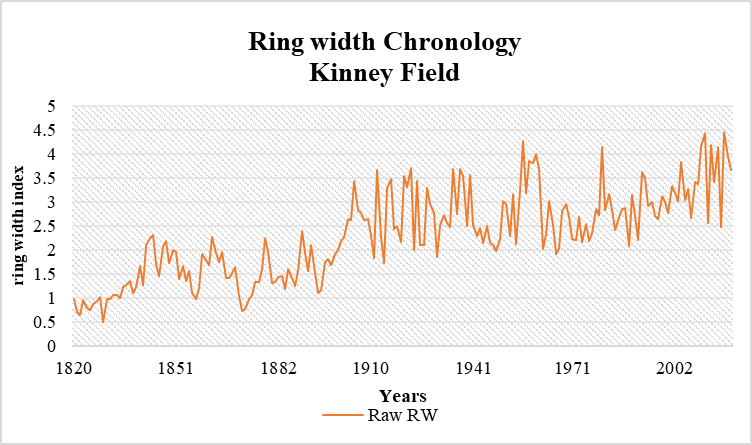 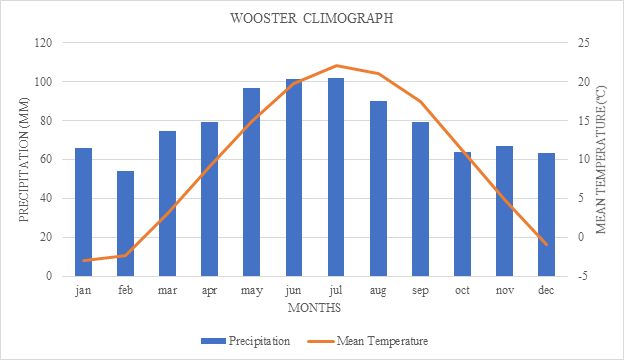 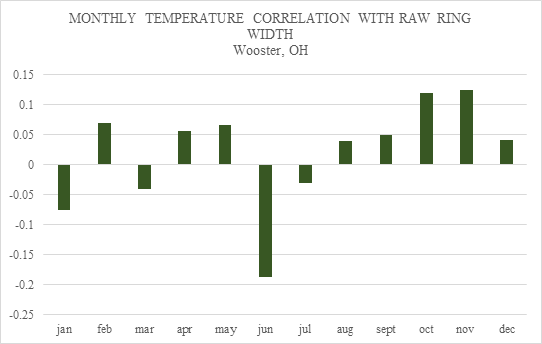 Fig. 4: Raw ring-widths correlated with monthly temperature records. Only the month of June is significant at the 0.05 level (the common interval is 1895-2019). 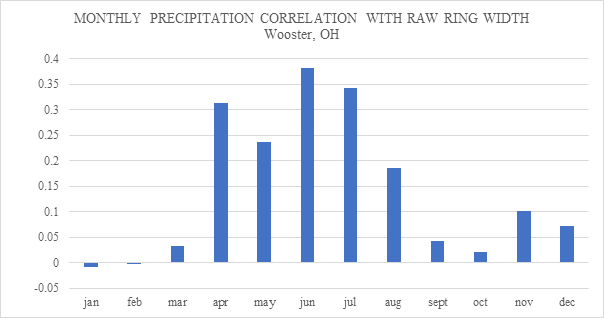 Discussion: The final ring width chronology is 200 years long from 1820 to 2019. The series intercorrelation is 0.66 whereas the mean sensitivity (measure of year to year variability) is 0.24. The series autocorrelation is 0.60 and is a measure of the persistence as it is when the chronology is correlated with itself. The mean ring width measurement is 4.25 mm, which is significantly high relative to other sites and implies that the trees have proper access to nutrients and there is little competition.  There is a strong positive correlation between the ring width and the precipitation in the months of April through July, and the trendlines for both closely follow each other throughout the chronology ( Figures 5, 6). Therefore, we can gather that the trees are tracking the low frequency increase (last ~100 year rise) in precipitation of the region and are also a good indicator of year to year April – July precipitation records in Wooster, OH. The correlation with monthly temperatures is only significantly negatively correlated with June temperature (Figure 4).  The correlation with June is -0.35 (Figure 5) is likely attributed to the high rates of evapotranspiration in the summer months, which can have negative impact on tree growth.

Conclusions:
1. The Kinney oaks are all less than about 200 years old and are therefore likely second growth;
2. The raw ring-width data from 19 tree cores has an upward trend strongly correlated with total April through July precipitation measured at the OARDC since 1888;
3. The negative correlation of -0.35 of raw ring width and June temperature is due to increased evapotranspiration demand during warm Junes. 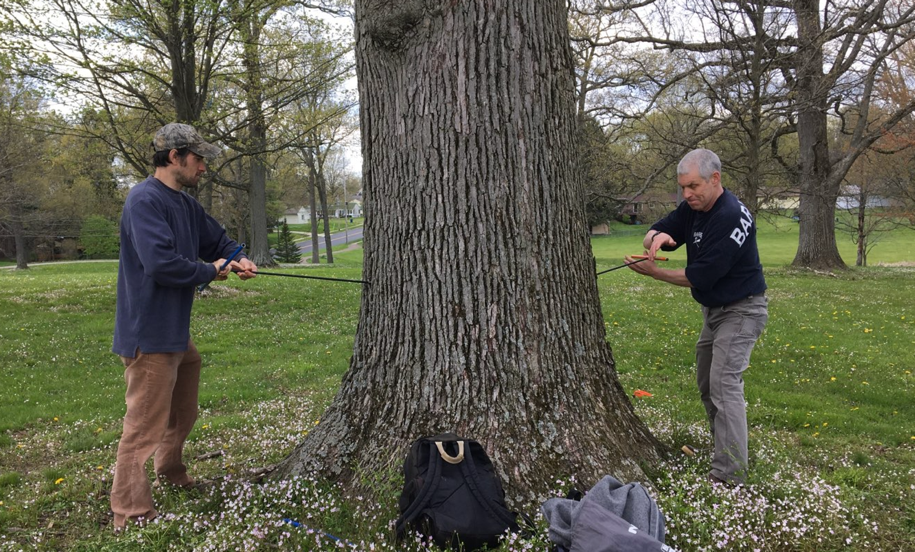 Acknowledgements:
This work is supported by the Sherman-Fairchild Foundation and the Luce Foundation. We also thank the organizers of AMRE 2020.

Hi, my name is Claire Cerne and this is my first blog post for the summer of 2020. I am a student research assistant for Greg Wiles at The College of Wooster. The blog I created is dedicated to highlighting research topics throughout this summer. I am working alongside another classmate to help analyze tree ring data and educate a group of young scientists living in Hoonah, Alaska.

Before the stay at home order due to the COVID-19 pandemic, Dr. Wiles, Dr. Ben Gaglioti, Dr. Dan Mann, and several students and I had plans to visit Alaska. I would be going to Dagelet Glacier to collect tree ring samples with Dr. Gaglioti and Mann. We were planning on taking a two-week trip (weather permitting) that would have been in the late May/ early June months. Unfortunately, this trip had to be canceled.

After the plans fell through, Dr. Wiles offered me and another classmate, Julia Pearson, a position for the summer that would focus on science education. We would work with the TRAYLS group in Hoonah, Alaska interested in the environment and add to their lesson plans with presentations. In our first Microsoft Teams meeting, we started with introductions, the basics of dendrochronology, and how to core a tree. The TRAYLS group has begun the tree coring process and once this is complete, they will be sending the cores to the College of Wooster. The cores will be scanned and we will begin analyzing. After this is complete, we will relay the information about the trees they collected cores from. In the mean time, Julia and I will give access to maps and presentations to teach the group about topics like the Little Ice Age, what happens to a tree when it is stripped, and the story of Glacier Bay.

This summer research position heavily relies on Microsoft Teams meetings, shared Google slides, and an open schedule for meetings during the week. Communication is key in this process and I am learning how to better communicate like asking more about certain topics or where I can find information if I get stuck. We had a meeting with one of Wooster’s science librarians, Zach Sharrow, to help us find academic sources from home. I have also had to learn to be more independent while working from home, how to create a work environment, and a create schedule that works with the rest of my family’s schedules. Adapting to working at home will be a summer-long process but with the support of Dr. Wiles and Julia, we will make an awesome final product with the TRAYLS group.

This work has been funded in support by the National Science Foundation. The grant that was received is the AGS 8001184 –RUI: Collaborative Research: Extending key records of Holocene climate change and glacier fluctuations in the North Pacific region using subfossil wood from Southeastern Alaska.