The College of Wooster 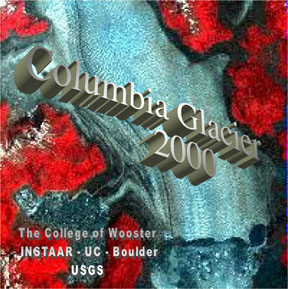 During the summer of 2000, I was able to travel to Alaska with the support of a National Science Foundation Research Experience for Undergraduates (REU) grant. While in Alaska I conducted research for my Independent Study at The College of Wooster. I traveled with four others, my advisor from The College of Wooster Geology Department, Dr. Greg Wiles, Dr. Parker E. Calkin of the University of Colorado in Boulder, Austin Post of the United States Geological Survey, and a fellow College of Wooster student, Aaron Shear (Figure 1).

This retreat leaves the Columbia Bay choked by icebergs of all sizes (Figure 3). As this retreat continues, trees killed by the glacier during past advances are unearthed. These trees were the subject of our trip to Alaska. The group spent the two weeks collected samples from these trees in an effort to describe the conditions surrounding the movement of the Columbia Glacier (Figure 4).

Using dendrochronology, I developed a thousand year tree-ring chronology from Columbia Glacier. Dendrochronology is a method of comparing tree rings from a group of trees in an effort to crossdate them and create a calendar date for their death. This provided the exact time when the Columbia Glacier advanced through an area of the Columbia Bay. Comparing this information to similar information collected for other glaciers in the area provided insights to the advance rates of calving glacier and contribute to the description of climate over the late Holocene.

Using sites throughout the Columbia Fjord (Figure 6), the Columbia Glacier tree-ring chronology was created. This preliminary chronology shows four distinct pulses of advance between AD 1057 and 1778 (Figure 7) during a maintained advance during this time with possible stabilization or minor retreat. Comparing these pulses of advance with those from surrounding land terminating glaciers within the Gulf of Alaska, it is clear that the Columbia Glacier has moved out of phase with land terminating glaciers. Possible causes of the asynchronous advance may include fjord geometry and water depth within the fjord. These aspects also play an important role in the ongoing retreat today. The initial retreat from the terminal moraine shoal may have been induced by climate change, however, the retreat has been maintained due to the large increase in the water depth behind the terminal moraine shoal.

The Tree Ring Lab of Lamont-Doherty Earth Observatory had information about many other dendrochronology research projects.

The Glacier Dynamics Group at the Byrd Polar Research Center, Ohio State University has excellent information about glaciers in general as well as the research they are currently working on.

This article co-written by Austin Post, who joined us on this research trip, discusses his work with the Iceberg Monitoring Project.